The Night Before Easter – Music to Inspire You

The Night Before Easter will feature a musical buffet of both traditional and contemporary gospel songs along with some show tunes and music made popular by Bebe and Cece Winans, The Isley Brothers, Josh Groban, Kevin Levar, Carrie Underwood, The Clark Sisters, Mahalia Jackson, James Taylor, Whitney Houston, Bill Withers, Jennifer Hudson, Anita Baker, The Temptations and many others. Join us to celebrate the Easter season and grab a little piece of heaven with Gwen Matthews and friends in The Night Before Easter. You are guaranteed to have a great time!

**Robert Robinson will not be performing due to unforeseen circumstances.**

GWEN MATTHEWS
In the 1970s, the Chicago native rocked Twin Cities clubs with the group Passage and recorded jingles for big-time clients such as Northwest Airlines and General Mills. Ever versatile, Matthews did a stint in Rupert’s Orchestra, performed in a jazz-soul trio with Debbie Duncan and Bruce Henry, and spent 11 years in Los Angeles working with Stevie Wonder, Philip Bailey and Kenny Rogers. Her résumé includes performing at jazz festivals in Europe and teaching voice lessons. She currently sings in the ever-versatile group Synergy.

“[Her] voice is rich and funky. Her music is full of lilting melodies, soulful rhythms and often is interjected with some jovial scatting. She moves your spirit. And at some point in her set, you are bound to hear someone in the crowd shout out: ‘You’d better sing, Gwen!’ ”
-Ginger Commodore 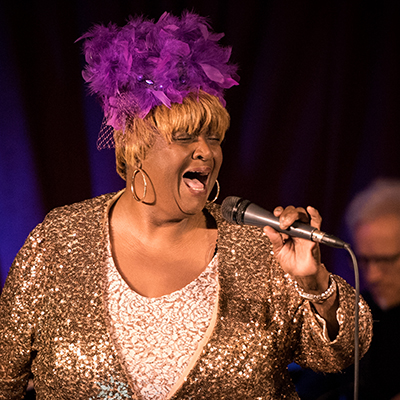