Laurel Canyon is a neighborhood in the Hollywood Hills region of the Santa Monica Mountains. The creative flowering that grew out of this section of Los Angeles in the 1960s and early 1970s produced some of the greatest music of that era, changing the culture and the lives of some of rock and roll’s most gifted artists. Imagine living down the road from Joni Mitchell or just upstairs from Jackson Browne. Imagine if all you had to do on a weekend night was walk down the street and you were at someone’s house and they had a guitar and a piano… and their name was Neil Young, or Graham Nash, or Glenn Frey. Imagine if your neighbors were musicians who were starting bands called The Doors, The Byrds, Crosby Stills and Nash, The Monkees, The Eagles, and The Mamas & the Papas.

Veteran singers Mary Jane Alm, Boyd Lee, Aimée Lee, Paul Frantzich and Timothy Frantzich, along with a stellar lineup of musicians will walk you through the streets of this magical place and time. You will hear the stories of some of your favorite musicians. Your memory will be flooded with songs from The Association, The Turtles, Linda Ronstadt, Carole King, James Taylor, Buffalo Springfield, Brian Wilson, The Jefferson Airplane and more… all who resided in this beautiful bubble of creativity, friendship, sunshine and music.

This show brings together what happened in this magical place, when it was just the right time, just the right space, with just the right musicians… in a very special moment in time that created the songs of Laurel Canyon. 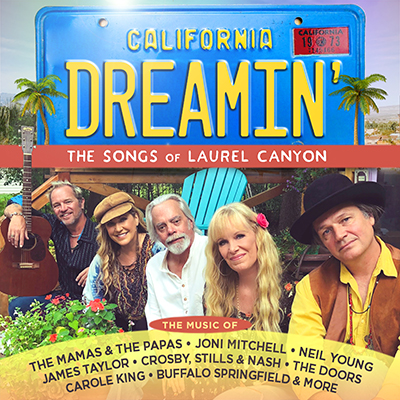