BOB! – The Music of Bob Dylan

BOB! – The Music of Dylan is a tribute rock band that offers both a familiar and an unexpected variety of his songs to crowds across the Midwest.

One of the most astonishing things about Dylan has been his ability to explore different styles of music. The band takes the audience on a journey from Dylan’s early protest songs, folk music, social justice ballads, and then through his iconic blues, country and rock music. You’ll be surprised and pleased with your rediscovery of the breadth and genius of his music.

You’ll hear Dylan tunes that you’ll want to sing and dance along with such as “Like a Rolling Stone,” “Knockin’ on Heaven’s Door,” “Forever Young,” “Positively 4th Street,” “Blowin’ in the Wind,” “All Along the Watchtower,” “Don’t Think Twice,” “If Not for You” and other classics.

BOB! – The Music of Dylan has been pleasing crowds for almost a decade. Steve Wold (lead vocals/guitar) has been performing in local bands for years and Randy Olejnicak (lead guitar) adds amazing texture to the songs (and also plays drums equally well!) Drummer Gary Cook has performed for years with several bands throughout the Twin Cities and Jeff Blexrud (bass guitar) is also an expert sound engineer. Colin Nelson (saxophone, percussion, etc.) plays in a local jazz group and his addition adds yet another layer, which gives the band a full and unique sound.

BOB! gets around town. The band regularly performs at the Lake Harriet Bandshell, Le Musique, at several amphitheaters in and around the metro, at local bars and clubs, at private and corporate events, as well as playing to fans at St. Paul Saints games and Canterbury Downs. We know you’re going to have a fantastic time watching BOB! – The Music of Dylan. 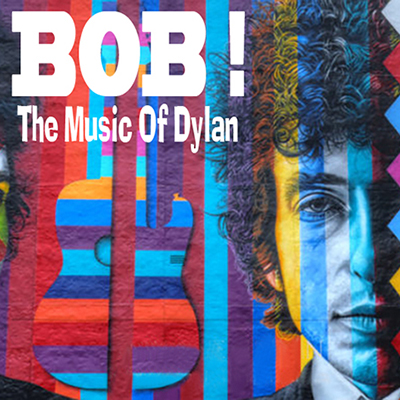