Don’t let the name fool you. We aren’t going unplugged, but we are playing songs whose foundation was built from acoustic guitars and acoustic instruments. Songs from groups like America (“Horse With No Name,” “Ventura Highway,” “Sister Golden Hair”), Gordon Lightfoot (“If You Could Read My Mind,” “Sundown Carefree Highway”), James Taylor, Jim Croce, Crosby Stills and Nash, Simon and Garfunkel, Tom Petty, and, of course, the Eagles all made this sound popular, but groups like Heart, Kansas, Boston, Fleetwood Mac, Pink Floyd, Bon Jovi and Led Zeppelin also had songs that were driven by acoustic guitars. We like to push the envelope and take you “all over the map” musically in our themes, featuring special guests and great songs “Dillo’s style” with Acoust-i-dillos – Acoustic Inspired Hits Over the Decades. 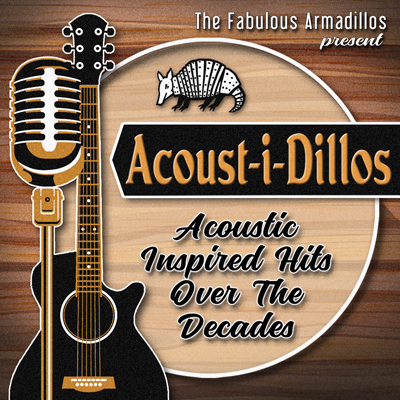