A Play by A.R. Gurney

Limited performances in the Playhouse Theatre!

Local beloved celebrities, Nancy Nelson and Don Shelby, have been invited to pair up in a poignant theatre collaboration to present A.R. Gurney’s Pulitzer Prize-nominated work, which ran successfully on Broadway and throughout the country. This timeless piece is directed by CDT Resident Artistic Director, Michael Brindisi.

In November of 2022, eight performances sold out in just three days and now we have announced eight more performances will return in February 2023 for an assortment of matinee and evening performances to enjoy in Chanhassen’s intimate Playhouse Theatre.

Don and Nancy play the roles of Andrew Makepeace Ladd III and Melissa Gardner. Both born to wealth and position Andrew and Melissa are childhood friends whose lifelong correspondence begins with birthday party thank-you notes and summer camp postcards and continues for some 50 years.

A unique and imaginative theatre piece which, in the words of the author, “needs no theatre, no lengthy rehearsal, no special set, no memorization of lines, and no commitment from its two actors beyond the night of performance.” The piece is comprised of letters exchanged over a lifetime between two people who grew up together, went their separate ways, but continued to share confidences. As the actors read the letters aloud, what is created is an evocative, touching, frequently funny but always telling pair of character studies in which what is implied is as revealing and meaningful as what is actually written down.

Get your tickets today!

DON SHELBY (Andrew Makepeace Ladd III) is considered the most decorated local news anchor in the country with two George Foster Peabodys, the broadcast equivalent of the Pulitzer Prize, three National Emmys with the WCCO-TV I-Team and the Distinguished Service Award from the National Society of Professional Journalists, among hundreds of other honors. He anchored WCCO-TV’s newscasts for 32 of his 55-year career in journalism. But, like his predecessor, Dave Moore, his very first love was theater. Upon his retirement from the news desk in 2011, Don appeared in the Lab Theater’s production of Rocky Horror, appearing with numerous Guthrie actors in a performance of 8 at the Varsity Theater. He was a featured actor in Safe at Home at the Mixed Blood Theatre, and he has performed more than 200 times, in character, as Mark Twain in shows at performing arts centers throughout the state, in New Orleans and even aboard the legendary Delta Queen Riverboat on the Mississippi River in St. Louis. Don was inducted to the Broadcast Hall of Fame, as well as the Silver and Gold Circles by the National Academy of Television Arts and Sciences. He is a Trustee of the Science Museum of Minnesota, as well as seven other boards ranging from climate change to racial healing. He is on the board of directors of VocalEssence. Don is the author of the book “The Season Never Ends” and has written the foreword to more than a dozen books. He has raised more than $100 million in charity donations. He is delighted to be paired with one of his dearest friends, Nancy Nelson, in this performance of Love Letters.

NANCY NELSON (Melissa Gardner) was born and raised in Minneapolis and has spent her entire life on television, stage, and radio. First on stage at age 8, she was still in high school when she did her first television show, “Date with Dino.” After high school graduation she began nearly two decades as a professional actor on stage at the Old Log Theater, was the midnight weather girl at WCCO-TV, host of “What’s New?” and news anchor/reporter at Channel 11 TV, played a role in the movie “Airport.” Nancy became a commuting wife when hired to anchor news at KKTV Los Angeles where she won 2 Emmy Awards for investigative reporting. She did a stint on KABC Radio, LA. Nancy’s presence went global, and she became known as the “International Infomercial Queen,” named by Forbes Magazine as the most influential international informercial presenter of the decade. This former Miss Minnesota was inducted into the Broadcast Hall of Fame, swam with dolphins, flew with the Blue Angels, drove a race car with Paul Newman, broadcast from the Academy Awards, threw out a Twins first pitch, traveled the world interviewing movies stars, presidents and astronauts, and she donated a kidney. Nancy is passionately dedicated to working on behalf of abused women, children, animals, the environment, the homeless, and the hungry. Today she is a Greeter-Emcee at Chanhassen Dinner Theatres. Nancy’s greatest blessing, she says, was the privilege of being married to her Billy, WCCO-TV news anchor, Bill Carlson. And now, “such sweet joy to share the stage with my dear, remarkable Don Shelby.” 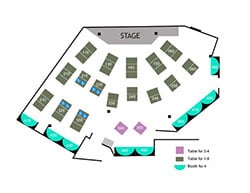 We currently do not have a run time for this show.