Chanhassen Dinner Theatres was founded in 1968. Original founders, Herbert and Carolyn Bloomberg, built the 90,000 square foot entertainment complex in Chanhassen, Minnesota located west of Minneapolis/St. Paul. He was an established developer and builder, and she, an interior designer. The two combined their talents and built Chanhassen Dinner Theatres (originally called, “The Frontier”). Critics questioned their sanity. 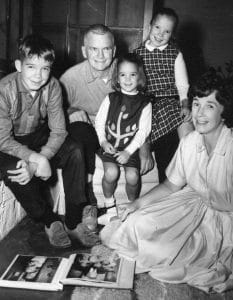 Who would build such a gigantic theatre complex in the middle of a cornfield? Today, Chanhassen Dinner Theatres is considered the nation’s largest professional dinner theatre company with multiple stages under one roof. It is also the largest privately-owned restaurant in the state.

In 1971 Fiddler on the Roof opened on the Main Stage and in the same year the theatre also opened a production of I Do! I Do! Chanhassen Dinner Theatres popularity grew. I Do! I Do! was slated for a six-week run and continued to be extended by popular demand. It finally closed 22.5 years later going down in history as the world’s longest-running musical production featuring its original cast. The stars, David Anders and Susan Goeppinger, arrived on scene to play the married couple featured in the production and within two years were married in real life. The couple starring in the record-breaking production were featured in press around the globe including the May 1, 1989 issue of People Magazine.

Gary Gisselman served as the founding Resident Artistic Director and under his artistic guidance Chanhassen developed its established reputation for producing high quality theatre. In 1987, Gisselman was hired to serve as Artistic Director of the acclaimed Arizona Theatre Company in Tucson, AZ. Gisselman was succeeded by seasoned actor and burgeoning director Michael Brindisi who originally hailed from Philadelphia, PA and performed on stage in his first Chanhassen production in 1971. He performed regionally, on and Off-Broadway, and eventually settled in Minnesota where he and his wife, Michelle Barber founded Minnesota Festival Theatre in Albert Lea, MN. In 1988 he jumped at the opportunity to become the theatres’ Resident Artistic Director. Just one year later, in 1989, the Bloombergs sold the theatre company to local entertainment entrepreneur Thomas K. Scallen, who owned entertainment operations, including The Harlem Globetrotters and The Ice Capades. In 2010, Scallen sold the theatre to a group of local investors led by Brindisi, his artistic partner Tamara Kangas Erickson, and Steven L. Peters. Kangas-Erickson has served as Resident Choreographer for Chanhassen since 2004 and began performing on Chanhassen’s Main Stage in 1981 at the age of 10. She graduated college, trained professionally as a dancer and worked for several years in design sales for Ralph Lauren in New York. Brindisi and Kangas-Erickson currently serve as President and Vice President and continue to run the theatre’s artistic programs. Solveig Huseth-Theis serves as General Manager. 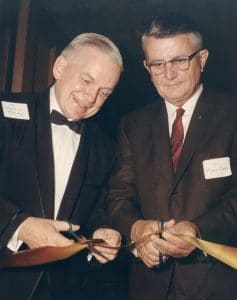 A producing theatre company, Chanhassen casts its own full-scale productions, designing and executing all elements on-site in the theatres’ exclusive shops, including scenery, properties and costumes. With four separate theatres and multiple event spaces Chanhassen offers a wide variety of theatrical productions, concerts, comedy improv, wedding, event and meeting services, and a full-service restaurant, Brindisi’s Pub. Chanhassen Dinner Theatres’ education department features a summer camp program offering a wide range of theatre training for children ages 5-18. Taught by members of the professional acting company and the theatres’ creative design teams, the recognized camp program was established in 1994. Thousands of kids and teens have benefited since its inception. The Teen Intensive program offers advanced theatre students opportunities to build and collaborate on their own musicals and focus on future careers in the performing arts.

Chanhassen Dinner Theatres is the largest privately-owned restaurant operation in Minnesota. Up to 1,400 guests can be served out of Chanhassen’s kitchen in an evening. 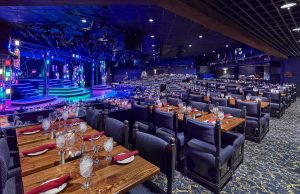 Guests can choose from a seasonally-changing menu, and once the curtain goes up, cocktail and dining service ceases until intermission, giving full spotlight to the production. In addition to its professional theatre company, Chanhassen Dinner Theatres employs up to 300 people, (including food and beverage operations, box office, marketing team, business office and plant operations) who accommodate the needs of the more than 12.5 million guests Chanhassen Dinner Theatres has served in its history.

The secret to Chanhassen’s success is simple. The theatres’ mission statement reads, “Chanhassen Dinner Theatres is committed to delighting its audiences and creating life-long memories with a high-quality, end-to-end entertainment experience.” Many sacrifices have been made along the way to uphold that standard of excellence in order to ensure success for generations to come.